Marion State Bank is pleased to appoint Robert D. Lane, President and CEO of Daniel Green Oil Company, Inc. and Mineral Lands, Inc., to its board of directors effective January 13, 2021. Robert’s great-grandfather, H.D. Green, served as the bank’s President for 17 years prior to being elected Chairman of the Board in 1963 where he served another 17 years. Robert looks forward to following in his great-grandfather’s footsteps by serving this great bank and community for years to come. He is joining the board at an exciting time as we continue growth in many areas, and we are confident that his experience in the financial industry will only benefit the bank’s customers and employees even greater. 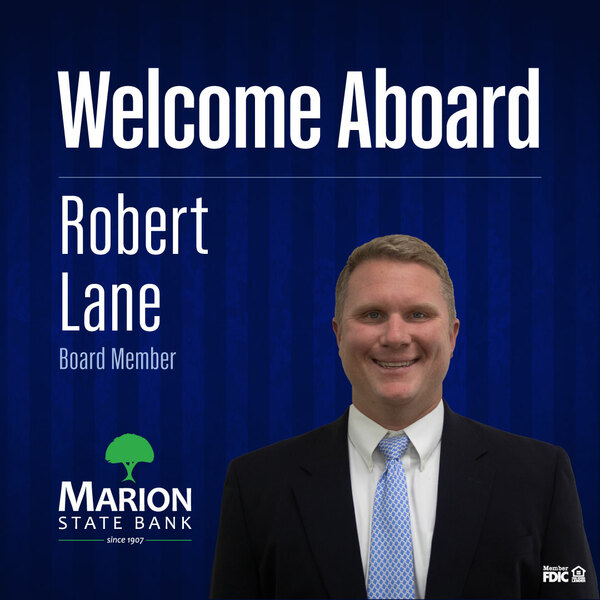 Although Robert’s family is firmly planted in Union Parish, he was born and raised in Monroe and graduated from Neville High School where he was a Parade All-American in football and baseball. On scholarship at the University of Mississippi, he achieved much success on and off the football field, earning his bachelor’s degree in Parks Recreation and Leadership Management. The Ole Miss graduate returned to his roots where he began a thriving career in the insurance industry. Robert is an independent insurance agent and provides financial services from his office within Reeves Coon & Funderburg, where he focuses on comprehensive life insurance, disability insurance, and annuities for families, estates, as well as commercial life insurance partnership plans. Robert also recently took over Daniel Green Oil Company in Marion for his late grandfather, Daniel B. Green.

Robert and his wife, Emily, are raising their twin daughters, Olivia and Landry, in Monroe but spend much of their time at their camp on the Ouachita River at Alabama Landing. Robert is an avid outdoorsman and can typically only be found on Hogue Island with the twins during hunting season. During football season, he proudly shines under the Friday night lights as a color commentator for the Neville Tiger Network. Robert and Emily are both coaches for the Monroe Youth Girls Softball League where Robert also serves as a board member. They are proud members of St. Paul’s United Methodist Church.